Madeliene Fellows is the daughter of Leroy LaVelle Fellows and Emma Louise Dennhardt.

Opal Fellows was born on 24 June 1905 at Pleasanton, Buffalo Co., Nebraska.1 She was the daughter of George Elbert Fellows and Minnie Inez Lilly.1 Opal Fellows married George Almon McCulley on 25 March 1922.1 Opal Fellows died on 2 October 2011 at Summitview Healthcare, Yakima, Yakima Co., Washington, at age 106.2 She was cremated in October 2011.2
As of 25 March 1922,her married name was McCulley.1 She lived in 2005 at Prosser, Benton Co., Washington.3

Following is the obituary for Opal McCulley:

YAKIMA - Opal McCulley, 106, died Oct. 2, 2011 at Summitview Healthcare in Yakima. She was born June 24, 1905, to Minnie and George Fellows in Pleasanton, NE. She retired from Sears in 1970. Opal loved the Mariners and crocheting for her family. Those beautiful gifts will keep her memory alive for generations to come. Her sense of adventure included a hot air balloon ride over Spokane on her 90th birthday and riding a 2-man ROTAX over Lake Chelan on her 91st. The pilot was so impressed he wrote an article about her for Ultraflight Magazine. She lived in many cities but Hardin, MT; Arco, ID; and Prosser, WA, had a special place in her heart. She is survived by her daughters, Bonnie Petty of Coeur d'Alene, ID, Helen Boozer of Pasco, WA, Margie (Bud) Burke of Yuma, AZ, Mary Jane Walker of Prosser, WA, and Wanda Roth of Union Gap, WA, and numerous grandchildren. She is preceded in death by her husband George and son Bob. At her request the only service will be a "family get together like the ones on my birthday." Her ashes will be placed in her family plot in Hardin, MT. The family wishes to thank the amazing staff at Summitview Healthcare Center.2

Ray Fellows was born in 1910 at Nebraska. He was the son of George Elbert Fellows and Minnie Inez Lilly.

Roger Fellows is the son of Leroy LaVelle Fellows and Emma Louise Dennhardt.1

Ruby Redman in March 1977 while in Minnesota

Her married name was Redman.

Following from an obituary for Ruby Redman in the Idaho Press-Tribune newspaper, dated 30 May 2001:

Rudy Redman, 98 of Caldwell, passed away May 27, 2001, at the beautiful Birchwood Retirement Home in Twin Falls, where she resided for the past year. Memorial services will be held at 11 a.m. Thursday, May 31, at the Flahiff Funeral Chapel, Caldwell.

Ruby was born Jan. 27, 1903, in Purdom (sic), Neb., a daughter of George and Minnie Fellows. She married James R. Redman on July 3, 1921, in Hardin, Mont., and they later moved to Watseka, Ill., where Mr. Redman was employed. They later moved to Scottsbluff, Neb., and in 1934, moved to Caldwell where they made their home. Ruby was very active in the community. During WWII, she was on the ration board, on the election board from 1940 until 1980, was very active in Van Buren School and worked at Crookham Seed Co.

She loved to take her grandchildren fishing and hunting. If a book were written about this lady, it would surely be a best seller. She touched the heart of everyone she met and people talk of "a heart of gold!" Yes, the lady had it all! Never thought about herself; it was always someone else.

She was preceded in death by her parents; her husband, James Redman; one son, Art; one daughter, Dolores Samuelson; and one granddaughter, Judy Luecket.

Still-born Fellows died in 1912.1 He was born in 1912 at Dunning, Blaine Co., Nebraska.1 He was the son of George Elbert Fellows and Minnie Inez Lilly.1

Thomas Fellows is the son of Walter Fellows and Mary Weibert.1

Deven Haylee Fennern is the daughter of Kenneth Richard Fennern and Paula Nicosia.

Laken Pauline Fennern is the daughter of Kenneth Richard Fennern and Paula Nicosia. 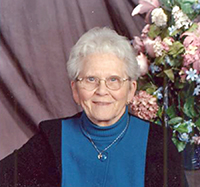 Alice Richards (saved from her obituary) 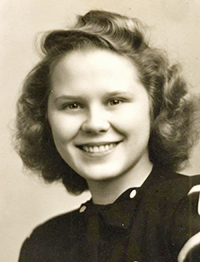 Memorial services for Alice Richards will be held at 11:00 a.m. Thursday, August 28, 2014 at the United Methodist Church in Ellendale. The Rev. Randy Cirksena will officiate.
Visitation will be held Wednesday, August 27 from 5:00 - 8:00 p.m. at the United Methodist Church, Ellendale and one hour prior to the funeral service. Alice died at the age of 87 on Friday, August 22, 2014 at Mayo Clinic Health Systems, Albert Lea, surrounded by family and friends.
Alice (Ferguson) Richards was born January 30, 1927 to Harold and Sena (Skow) Ferguson at Naeve Hospital, Albert Lea. She grew up, attended school and lived her entire life in the Ellendale area. As a young girl, Alice spent her time helping on the farm and singing with her 6 sisters which they continued to do throughout their lives. Alice attended nurses training at Naeve Hospital where she received her RN. She worked at the Owatonna Hospital, Good Samaritan Nursing Home and Fountain Lake Treatment Center. Alice was an active member in her church and choir. She was involved in many volunteer organizations, especially AA and gave of her time freely to each one.
She was united in marriage to Laurel (Dick) Richards on December 5, 1948 at the Methodist Church in Ellendale. Dick and Alice spent lots of time at their cabin in Longville, Minnesota where they enjoyed visiting for hours with family and friends. They also loved to travel and dance. Oh, how they loved to dance!
Alice will be remembered for many things but most of all for her joyful attitude and her love of people.
Her greatest joy was her family which includes her children; Dan (Sue) Richards of Geneva, David (Joyce) Richards of Albert Lea, Lauri (DeWayne) Jensen of Geneva; grandchildren; Tomm (Tara) Richards of Mankato, Brett (Jess) Richards of Albert Lea, Jena Thompson of Albert Lea, Brody (Katie) Richards of Albert Lea, Gretchen (LaShawn) Ray of Chicago and Abbey Jensen of Apple Valley; great-granchildren; Tristan, Taya, Torey and Tiegen Richards, Maxx and Maya Richards, Cole and Ethan Thompson, Jaxon, Griffyn and Ryker Richards, DaMarcus, Carson, Braxton and Brock Ray; 3 sisters; Anna (Fred) Foster, Mildred (Gerry) Flugum and Rosey (Eldon) Peterson; many brother and sister-in-laws, nieces and nephews, each very important to her.
She was preceded in death by her husband Dick Richards, her parents, 3 sisters; Wanda (Fisher) Christiansen, Helen (Harry) Holmes, Beulah (C.Hency) Crabtree and many other loved ones.
- See more at: http://www.bonnerupfuneralservice.com/obituary/Alice-Richards/Ellendale-MN/1412489#sthash.5D14E0sm.dpuf.2

Children of Toby Ann Ferrell and Marion A. Perkins