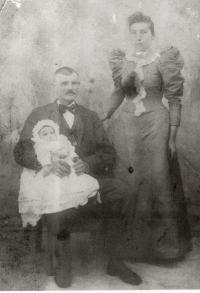 Tom and Ann (Nestaval) Sklenar with baby Katherine
Thomas Sklenar was born in January 1861 at Bohemia.1 He was the son of Frank Sklenar and Katherine Hovet. Thomas Sklenar married Ann Nestaval, daughter of Jacob Nestaval and Barbara Kardon, on 12 February 1894 at Montgomery, Le Sueur Co., Minnesota. Thomas Sklenar died before 1910 at Washington.2
Tomas arrived in the US from Bohemia on 28 Apr 1877, at the age of 17. He immigrated on 28 April 1877 to New York, New York Co., New York,

The New York City Immigration Passenger Lists, show that on 28 Apr 1877, the vessel Mosel on it's voyage from Bremen, Germany, with the following Sklenar family from Bohemia as passengers: Franz 49 years, Catharine 43 years, Tomas 17 years, Franz 14 years, Johann 9 years and Catharine 3 years. Franz was listed as a workman. Franz Sklenar was listed as passenger number 262 in the passenger list. The Mosel had 436 persons on board.

The Mosel was 3,125 gross tons, length 349 ft x beam 40.3 ft, one funnel, two masts (rigged for sail), iron hull, single screw, speed 12 knots, accommodation for 90-1st class passengers, 126-2nd class passengers and 680-3rd class passengers. Built by Caird & Co, Greenock, she was launched on 20th Aug.1872 for North German Lloyd, Bremen. Her maiden voyage started on 4th Jan.1873 when she left Bremen for Southampton and New York and on 11th Dec.1875 she was badly damaged in a bomb explosion in Bremen with the loss of 128 lives.


Following are other SKLENAR's in NYC passenger lists, possible relations?

F, #4236
Last Edited=13 Jun 2001
Baby girl Skluzacek was the daughter of Joseph Skluzacek Sr. and Katherine Sticha.
The cause of death was died at birth. Rice County Families, Their History Our Heritage, 1981, pg 681.

Following from Faribault Daily News, 27Apr 1957 Saturday.
Joe F. Skluzacek, 89 died Friday afternoon, April 26, at his Lonsdale home. He was a lifelong resident of Lonsdale. Funeral services will be held Monday morning, April 29, at 11:00 o'clock from the Immaculate Conception Church in Lonsdale. Burial will be in Calvary Cemetery, Lonsdale. The Catholic Workmen Lodge is requested to attend the services in a body. Mr. Skluzacek is survived by his wife and 11 children.


Following from Faribault Daily News, 11 May 1957 Saturday, page 2 column 2-3.
A Solemn Requiem was recently entoned at the Immaculate Conception Church in Lonsdale, for Joseph Skluzacek, Sr., by his son, the Rev. Jerry S. Skluzacek, as celebrant, and another son, the Rev. Father Valentine Skluzacek, as deacon. The Rev. Stephen Kucera of Iowa was subdeacon, and the Rev. Charles C. Jirik and the Rev. Richard Skluzacek officiated. Pallbearers were Joseph Skluzacek, Theodore Jirik, E. Skluzacek and Donald Skluzacek. All his grandsons were honorary pallbearers, and internment was in Calvary Cemetery.
Present in the sanctuary were the Very Rev. C.M. Popelka and the Rev. Alfred Skluzacek of New Prague, the Rev. W.J. Jiracek of St. Paul, the Rev. Stanley Skluzacek of Olivia, the Rev. Francis Tomek of Montgomery, the Rev. J. Herman of New Market, the Rev. S.J. Srnec of Veseli and the Rev. L. Urbancek and the Rev. J. Millota of Protivin, Iowa, as well as school sisters.
Joseph F. Skluzacek passed away on Friday afternoon, April 26, at 4:30 p.m. at the age of 89. Born in Wheatland Township in Rice County, Mr. Skluzacek lived all his live in Lonsdale. He was married to Elizabeth Trnka on Nov. 17, 1891, in the Most Holy Trinity Catholic Church in Veseli. He is survived by his wife and 11 children: Mrs. Frank A. (Ludmilla) Kirik, Lonsdale; Joseph J. Skluzacek, New Prague; George A. Skluzacek, John T. Skluzacek, and the Rev. U.S. Skluzacek, Protivin, Iowa; Edward E. Skluzacek, New Prague; Theodore Skluzacek, Frank T. Skluzacek, Venerable Sister M. Valeria of St. Paul; the Rev. Valentine Skluzacek, St. Procopius Abbey, Lisle, Ill., and Miss Josephine Skluzacek at home. He is also survived by one sister and four brothers: Jacob of Northfield, Albert of Faribault, Frank A. and Anton of Fallbrook, Calif., and 43 grandchildren and 52 great grandchildren.
Mr. Skluzacek was a successful farmer all his life. He served many years as president of the State Bank of Lonsdale, and was president of the State Insurance Company of New Prague. He held several offices in the Catholic Workmen (Katolisky Delnik), and was frequently a delegate to state and national conventions of the Fraternal Insurance Organization.

Mary Skluzacek, the daughter of Joseph and Elizabeth (Trnka) Skluzacek, was born May 13, 1912, at New Prague. She entered the School Sisters of Notre Dame in 1928 and took first vows in 1931. She taught upper and middle grades for 27 years in elementary schools in Minnesota, Iowa and Washington. She earned her bachelor's degree in education from Holy Names College in Spokane. She assisted in the Novitiate of School Sisters of Notre Dame in the Milwaukee Motherhouse and helped with general domestic work for 26 years, spending two years in Detroit. Returning to Mankato in 1984, she did community service in the Provincial House and in Hastings before retiring to Good Counsel in 1993.

She is survived by one brother, Edward Skluzacek of New Prague; and one sister, Josephine Skluzacek of Northfield.
She was preceded in death by two sisters and seven brothers: Ludmilla Jirik, Joe, George, John, the Rev. Jerry, Ted, Frank, Abbot Val Skluzacek and Josephine's twin, who died at birth.


Following from the Faribault Daily News, 26 Nov 2002 Tuesday:
LONSDALE -- Frank T. Skluzacek, 92, of Lonsdale, died Sunday, Nov. 24, 2002, in St. Francis Hospital, Shakopee.
Services will be held at 10 a.m. Wednesday in Immaculate Conception Church, Lonsdale, with the Rev. Michael Sauber officiating. Burial will be held in Calvary Cemetery, Lonsdale. Visitation is scheduled for 4-8 p.m. today and one hour prior to Mass at the White Funeral Home, Lonsdale.

Frank T. Skluzacek was born Jan. 20, 1910, in New Prague. He married Cecelia in August of 1935. He was a farmer and part-time custodian at Immaculate Conception Church in Lonsdale. He also worked at Lonsdale Tool.

He is survived by his wife, Cecelia of 67 years; one son, David (and Kathy) Skluzacek of Lonsdale; eight grandchildren; 11 great-grandchildren; one brother, Edward Skluzacek; and two sisters, Sr. Valeria Skluzacek and Josephine Skluzacek. He was preceded in death by one son, Jerome; one grandson, Lukas Ceplecha; six brothers; and one sister.

Thomas C. Skluzacek Was Engaged in Coal and Implement Business

Thomas C. Skluzacek, 60 year old Lonsdale business man, passed away at his home in Lonsdale on Thursday evening, August 7 at 9:30 o'clock. He had been ill for about seven weeks.
Thomas Skluzacek was born in Wheatland Township on March 29, [1887]. He was the son of the late Mr. and Mrs. Josef Skluzacek. He attended rural grade schools, Montgomery high school and Mankato Business College.

He started working at the Lonsdale State Bank at the age of 19 and worked there till 1930. That year he started working for the Fidendill Land Bank of St. Paul for some time. Later he became engaged in the implement and coal business in Lonsdale, which he ran to the time of his death.

He married Emily Nestaval at Montgomery on June 4, 1913. He is survived by his wife and two daughters, Mrs. James (Vivian) Wayne of San Francisco, Calif., and Mrs. Paul (Stella) Fink of Northfield.
Also surviving are two sisters, Mrs. Mary Kucera of Le Center, Mrs. Anna Schatz of Montgomery, and five brothers, Joseph F. of Lonsdale, Albert J. of Faribault, Jacob C. of Northfield, Frank A. of New Prague, and Anthony of Arizona.

The funeral was held from the Immaculate Conception Church at Lonsdale on Saturday morning, August 9 at 9:30 o'clock. Rev. Stanley Skluzacek officiated at the requiem mass. Interment was in Calvary cemetery.
Pallbearers were Francis Jirik, Leonard Skluzacek, Roland Skluzacek, Theodore Skluzacek, Frank Skluzacek, and Daniel Skluzacek, all nephews of the deceased.

Following from History of Rice and Steele Counties, volume II, published in 1910, compiled by Franklin Curtiss-Wedge, page 1442-1443.
Thomas Skluzacek was born in Wheatland , March 31, 1887., a son of Joseph and Katherine (Sticha) Skluzacek, natives of Bohemia. The father was by occupation a farmer, and came to this country in 1855, locating at St. Louis, remained there about one year, and then came to Minnesota, settling in Jordan, where he resided for six months. He then moved to New Prague, where he was in the hotel business for about eight years; from there he moved to Wheatland township, where he bought a farm in section 19, when he carried on until 1890. He deeded the property to his oldest son, Joseph F., and moved two miles further south where he farmed until 1907. He moved to Lonsdale where he now lives. Mr. Thomas Skluzacek was educated in the district schools of Wheatland, and at Montgomery. He spent seven months at a business college in Mankato. After leaving school he took up banking. He started as bookkeeper in the State Bank of Lonsdale, and is now cashier. He is one of a family of fourteen children. In his political views he is a Republican, and is a member of the Roman Catholic Church. He is now the village recorder and is a stockholder in the Lonsdale Bank.


Following from The Faribault Daily News newspaper of 14 Aug 1947 Thursday, page 14, column 1.
Funeral services were held at the Church of the Immaculate Conception on Saturday morning, August 9, for Thomas C. Skluzacek of Lonsdale who passed away at his home of Thursday evening, August 7.


Following from The Faribault Daily News newspaper of 25 Aug 1947 Monday, page 8, column 1.
Thomas C. Skluzacek, a well known member of the community passed away at his Lonsdale home on Thursday, Aug. 7, at 9:30 p.m. after an illness of seven weeks. He was born on March 29, 1887, son of the later Joseph and Catherine Skluzacek, in Wheatland township. After attending the rural schools, Montgomery high school and Mankato Business College, he entered the Lonsdale State bank as assistant cashier at the age of 19 and worked there until 1930. After that he was engaged in the coal and implement business until his death at the age of 60. On June 4, 1912 he was united in marriage to Miss Emily Nestaval at Montgomery.
In 1912 he served at village clerk and worked as land appraiser for Federal Lank Bank in 1930 and 1931. Always interested in agriculture he assisted in organizing the first 4-H club in Rice county and in this community. He also took an active part in the Farm Bureau. Mr. Skluzacek was a lifelong member of the Immaculate Conception parish and the many floral tributes and innumerable mass offerings attest to the respect he enjoyed among his many friends.
The deceased is survived by his wife and two daughters, Mrs. James A. Wayne (Vivian) of San Francisco, Calif., and Mrs. Paul J. Fink of Northfield and four grandchildren. He is also survived by two sisters, Mrs. Mary Kucera of LeCenter, Mrs. Anna Schatz of Montgomery, and five brothers, Joseph F. of Lonsdale, Albert J. of Faribault, Jacob C. of Northfield, Frank A. of New Prague, and Anthony of Arizona.
Funeral services were held at the Immaculate Conception church on Saturday, Aug. 9, at 9:30 a.m. The Rev. Stanley J. Skluzacek, intoned the requiem high mass. Internment was made in Calvary cemetery. Pallbearers were all nephews of the deceased: Frank Skluzacek, Theodore Skluzacek of Lonsdale, Leonard Skluzacek, Roland Skluzacek, Daniel Skluzacek of Northfield, and Frank Jirik of Webster. Relatives and friends from out of town present at the funeral included Mr. and Mrs. Jacob C. Skluzacek of Northfield, Mrs. William Tralee of Northfield, Rev. Jerry Skluzacek and Miss Josephine Skluzacek of Protivin, Iowa, Mr. and Mrs. Bert Traxler and Mrs. Anna Schatz and son, Joseph of Montgomery, Mr. and Mrs. Frank M. Kaisersatt and daughter Harriet of Faribault, Mr. and Mrs. S.C. Gale of Minneapolis, Mr. and Mrs. George Fink, and Mr. and Mrs. Warren Fink of Northfield, Mr. and Mrs. Arnold Fink of St. Paul, Mr. and Mrs. J. Minar of New Prague and Mr. and Mrs. Elmer Mahowald of Northfield.