Jessie Harn was the daughter of Fred Harn and Alice (?) Jessie Harn married Clarence Mason.
Her married name was Mason. 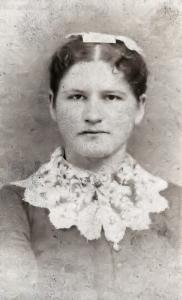 Jessie R. Harn was born in 1881.2 She was the daughter of George Wesley Harn and Alice Elenor Crowch. Jessie R. Harn died in 1894.2 She was buried at Graceland Cemetery, Fairbury, Livingston Co., Illinois.2

John Harn was born on 16 October 1808 at Carroll Co., Maryland.1,2 He was the son of Mathias Harn and Amelia Shipley. John Harn married Henrietta Hettenhouser, daughter of Frederick Hettenhouser and Charlotte Florence, on 8 November 1844 at Washington Co., Maryland.1,3 John Harn died on 11 September 1876 at Cameron, Clinton Co., Missouri, at age 67.3 He was buried at Packard Cemetery, Cameron, Clinton Co., Missouri.

John Harn was born circa 1865 at Illinois information from 1880 Illinois Census. He was the son of Jonathan Harn and Susan Crabtree.

John Harn was born circa 1865.1 He was the son of Robert Wilson Harn and Harriet Levingston. John Harn married Ida L. Johnson. John Harn died circa 1929.1

John Harn was born in November 1889 at Illinois According to 1900 Census, born in 1889 in Illinois. He was the son of Reason E. Harn and Martha Jane McNeil.

The following article was from TERCENTENARY HISTORY OF MARYLAND, volume III, published in 1925, by the S.J. Clarke Publishing Co., page 734-735:
In commercial circles of Baltimore the name of Harn has long been synonymous with enterprise, reliability and integrity, and the initiative spirit and executive force of the father are ably supplemented by the well-directed efforts of his son, John Edwin Harn, a civil engineer by profession and a member of one of the largest construction firms in the city.
John Edwin Harn was born in Baltimore, July 12, 1892 and comes of Scotch and Irish ancestry, whose sturdy qualities he has inherited. His great-grandparents were Ephraim and Elizabeth Harn, whose home was situated on a farm in Howard county, Maryland, and their family numbered nine children. Their son, Edwin W. Harn, was born in Triadelphia, Maryland, and served as apprenticeship to the weaver's trade. He was long employed as superintendent by the firm of James S. Gary & Son of Alberton, Maryland, and subsequently removed to Hood Hill, Carroll county, where he operated a farm for a few years.
He was an honored veteran of the Civil war, gallantly defending the Union cause, and his death occurred in Baltimore when he was seventy-six years of age. He had married Leoline Elizabeth Evans, who survives him and has reached the age of seventy-seven.
They had a family of six children, of whom Willard Eugene was the second in order of birth, his natal day being June 9, 1918. He attended the public schools of Howard county and Baltimore city and gained his first knowledge of the builder's trade in the employ of John Cowan, in whose service he remained for many years, rising to the position of superintendent. In 1904 he embarked in business as a building contractor, securing a location at No. 213 North Calvert street, and in 1915 removed to his present address at No. 2314 Oak street. He has an expert knowledge of the business and is a recognized leader in his chosen field of activity.
On January 1, 1891, he married to Miss Nannie M. Bopst, a daughter of John and Louisa D. (Miss) Bopst, and they and they have become the parents of three children, John Edwin of this review being the eldest; Edith Muriel was born May 1, 1894, and won the A.B. degree from Goucher College in 1916. She received the Ph. D. degree from Johns Hopkins University in 1920 and is now professor of Romance languages at the Agnes Scott College in Decatur, Georgia; and Lillian Pauline was born November 13, 1895, and is the wife of James C. Miller, a prominent attorney of this city.
John Edwin Harn supplemented his public school training by a course in the Baltimore City College from which he Was graduated in 1910 and in 1915 Cornell University conferred upon him the degree of Civil Engineer. He then joined his father in the contracting and building business and in 1917 was admitted to a partnership in the firm of Willard E. Harn & Company, of which he is now secretary and treasurer He is alert to every new avenue opened in the natural ramifications of the business and has contributed materially toward its expansion and development through earnest, systematic effort. The company has outdistanced many Of its competitors and one of the finest examples of its handiwork is the Rivoll Theater of Baltimore. It was awarded the contract for rebuilding three warehoused of the Sexton Company on West Gay street, destroyed during the memorable fire of 1904, and later erected St David's Episcopal church in Roland Park, the first monolithic concrete building constructed in Maryland. The firm makes a specialty of home building and was awarded the contracts for the residences of James C. Fenhagen, John E. Semmes, Jr., Morris Whitridge, J. Ross Meyers, Mrs. Ida L. Dohme, John H. Barrett, Dr. Gordon Wilson, Thomas R. Brown, William H. Bryan and others. The work of the company represents the highest degree of skill in the builders' art and the firm has established an unassailable reputation for business integrity and reliability.
In Baltimore, on June 10, 1916, Mr. Harn was married to Miss Elsie Marine Norrington and they have two sons: Edwin W. and John Norrington Harn. The former was born July 10, 1917, and the latter October 5, 19l9. Mrs. Harn is a native of Aberdeen, Maryland, and there attended the public schools, completing her education in Baltimore. She comes of English lineage in the paternal line and maternal ancestors were of Welsh extraction. Her father, Edward Norrington, engaged in the retail Shoe business and was numbered among the leading merchants of Aberdeen. He married a Miss Travers, whose demise occurred in Baltimore in 1916. They were the parents of four children: Rodman, who died at Camp Meade during the influenza epidemic, at which time he was in training for service in the World war; Mary; Elsie M; and Elizabeth, who is the wife of George L. Hochsein of Baltimore.
Mr. Harn enjoys football and baseball, but his favorite sport is tennis. When national issues are at stake he casts his ballot for the candidates of the republican party, but at local elections supports the nominees of the democratic party. He attends St. Luke's Evangelical Lutheran church and belongs to Theta Psi, a fraternity of Cornell University. He is a member of the Engineers Club of Baltimore and an associate member of the American Society of Civil Engineers, while his military experience covers service in the Aeroplane Engineers Division of the Signal Corps of the United States Army at McCook field, Dayton, Ohio, during the World war. He is an able exponent of his profession, a progressive and capable young business man, a loyal and public-spirited citizen, and possesses those qualities of character which make for strong and enduring friendship. His Social Security Number was 219-05-5894 issued in Maryland prior to 1951. SSN Death Index lists birth as 12 Jul 1892, death as Dec 1984, having resided in Silver Spring, Maryland. The cause of death was Myocardial Infarction.2

His second wife was Frances "Fanny" Leighty, widow of John Henry Merrell and daughter of Henry & Sarah Leighty of Fayette Co, PA. She was born 31 Oct 1817 Fayette Co, Pennsylvania. John HT Harn married Fanny Leighty Merril in Apr 1863. They had many years together before Mr. Harn's death in 1886.

Daniel Leighty and Henry Leighty were brothers, so the two Frances Leightys were first cousins.

Following from the book HISTORY OF FREDERICK COUNTY, MARYLAND, by T.J.C. Williams, reprint of the 1910 edition, Published in 1967 by Regional Publishing Company, page 1557-1558.
John H. Harn, a veteran of the Civil War, and a well-known farmer of Woodville District, Frederick County, Md., son of Singleton and Maria Cordelia (Harn) Harn, was born on a farm at the old Friendship Woolen Factory, Linganore District, Frederick County, Md., November 26, 1839.
John H. Harn spent his boyhood and youth at the home farm at Friendship Factory. He received his education in the Friendship school, which he attended during the winter terms until he was twenty. Some of his teachers were: Ellen Harn, William Carmock, John Blocker, Carilla Harn, and Edward Poole. He was only ten years of age when he began work in his father's woolen factory, where he learned the business in all its details, carding, spinning, weaving, etc.
On August 16, 1862, John H. Harn enlisted at Frederick, in Company B, Captain John McKechney, Seventy Maryland Volunteer Infantry, Colonel Webster. The regiment was assigned to General Warren's Corps, Army of the Potomac. He was with his regiment in all the battles in which it was engaged, and bears, on his left ear, the mark of a bullet which caused a purple swelling. An attack of dysentery sent him for a short time to the hospital at City Point, Va. Mr. Harn took part in the following battles and skirmishes: Funkstown, Md., July 12, 1863; Haymarket, Va., October 19, 1863; Battles of the Wilderness, May 5-7, 1864, in this engagement his brother Luther, received a scalp wound from a bullet; Laurel Hill, May 8, 1864; Spotsylvania, May 9-20, 1864; Harris Farm, May 19, 1864; North Anna, May 23-27, 1864; Shady Grove, Va., May 30, 1864; Bethesda Church, May 31 to June 1; Cold Harbor, Va., June 2-5, 1864; Seige of Petersburg, 1864 to 1865, which included the engagements at the Weldon R.R., August 18-21, 1864; Poplar Spring Church, September 30, 1864; Chapel House, Va., October 1-3, 1864; Peebles Farm, Va., October 7-8, 1864; Hatches Run, October 27, 1864; Raid to Hick's Ford, Va., December 7-12; Dabney's Mill, February 6, 1865; White Oak, Va., March 31, 1865; Five Forks, Va., April 1, 1865; and Appomattox, April 9, 1865.
John H. Harn was discharged at Arlington Heights, May 31, 1865, and mustered out in Baltimore, Md. Returning to Frederick County, Mr. Harn began working on the home farm. After his marriage, he settled on the farm which he now occupies, consisting of 155 acres of arable land in Woodville District, the property of his father-in-law, Daniel Long. John H. Harn is a Republican, interested in all that concerns the good of the community. He is highly esteemed by his fellow citizens.
John H. Harn was married, April 5, 1877, to Mary A. C., daughter of Daniel and Delila (Spurner) Long. Their children are: 1, Letha Zelma, at home; 2, William D., born February 20, 1885, at home; attended the public schools until he was sixteen, then spent three years at Maryland Commercial Institute, graduating in the class of 1904. Mr. Harn is a member of Linganore Methodist Episcopal Church.
John H. Harn's wife, was born in Woodville District, Frederick County, Md., in the house which she now occupies, December 11, 1848 and received her education in the Friendship school. The children of Daniel and Delila (Spurner) Long are: 1, Thomas W., deceased; 2, Daniel James, deceased; 3, Cyrus Green, deceased; 4, George P., deceased; 5, John L., of Mount Airy; 6, Annie M. (Mrs. Edgar Pennington), of Rockingham County, Va; 7, Josephine C. (Mrs. Luther E. Harn), deceased; 8, Mary A.C. (Mrs. John H. Harn); 9, William D., on the homestead. In Civil War, Company B, 7th Maryland Regiment Volunteers. Ellen Dorcas Harn Manuscript.

Diagnosed with Prostate Cancer in March 1994 and then diagnosed with inoperable Lung Cancer in December 1994. He was hospitalized from March 1995 until his death on 02 Apr 1995.