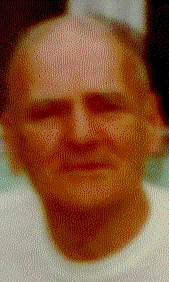 The following obituary is from Faribault Daily News, 07Feb1927, pg 8, col 6.
Jeremiah McCarthy, a native and resident of Faribault for 59 years, died Sunday afternoon at the St. Lucas hospital where he had been seriously ill for some time. His home is at 1421 Fourth street Northwest. Mr. McCarthy was a painter by trade and had carried out his occupation practically all his life. He was born in Faribault 59 years ago and had lived here since. Surviving Mr. McCarthy are his wife and three sons, John, Will and Frank. A sister also survives him. Funeral services will be conducted Tuesday morning at 9:00 o'clock at the Immaculate Conception church, with Father Ryan officiating.

The following obituary notice was in the Faribault Republican, 06May1914:
Miss Sarah McCarthy died Saturday morning, May 2, at 9:30, and was buried Monday morning in Calvary cemetery. The funeral was held at 9 o'clock a.m. in the church of the Immaculate Conception, Father Cahil officiating. The pallbearers were Capt. McGinnis, John Liverseed, Peter Orth, B.J. Sheridan, Edward Sheridan and Thomas Sheridan.
Sarah Sheehy was born in Broadford, County Limerick, Ireland, on April 4, 1883 [sic, should be 1833]. At the age of 19 she came to this country. She is survived by six sons and one daughter. Her daughter, Bridget, now Mrs. J.M. Tracy, resides at Taylor, N.D. Her sons are Charles, now in Mexico; John of Minneapolis; James of Wheatland, and Joseph and Jeremiah of Faribault. 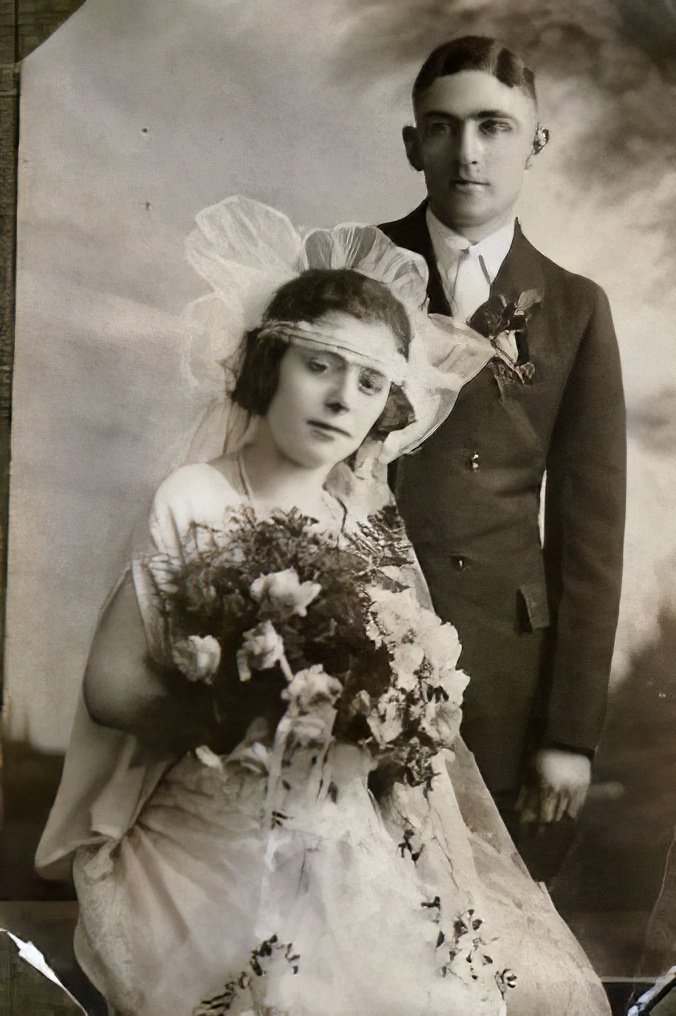 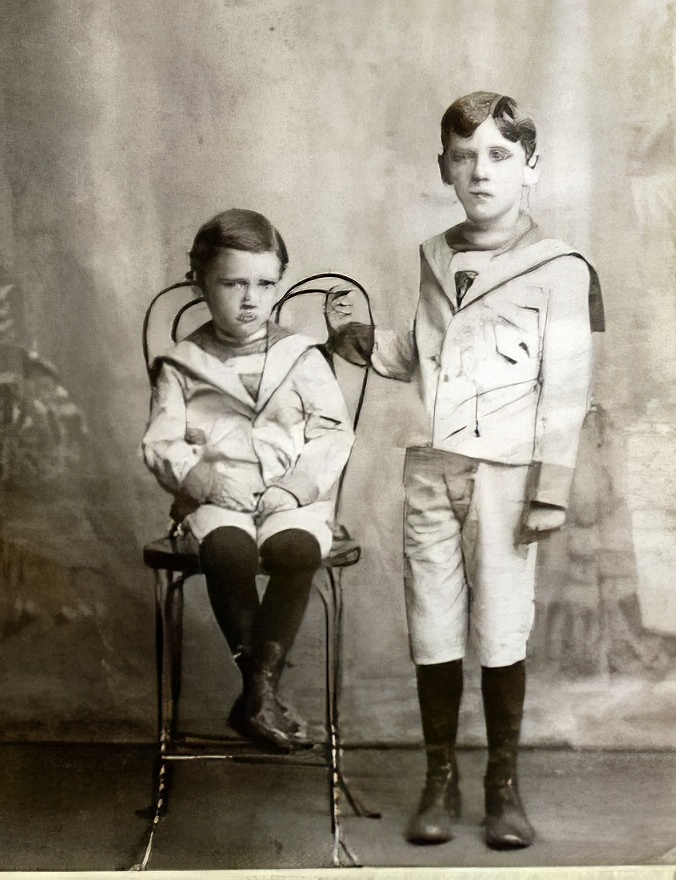 Jack and William McCarthy as kids 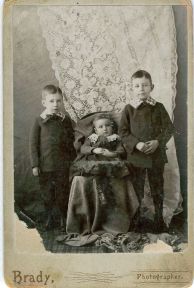 TUESDAY JANUARY 17, 1956 Winona Deaths John P. McCarthy John P. McCarthy, 57, 256 W. 4th St., died this morning at Winona General Hospital after an illness of several years with a heart ailment. A World War I veteran, he was born Feb. 21, 1898. at Faribault. Minn., and has resided in Winona 11 years. He is survived by his wife; two daughters, Mrs. Fred (Helen) Kranz, Dover, and Mrs. Allan (Beatrice) Kirchner, Owatonna; three brothers, William, Faribault. and Frank and James, St. Paul, and six grandchildren. Burial will be in Faribault; funeral arrangements are being completed at the Breitlow Funeral home.

John was born in a house with an attending midwife in Faribault, MN. He attended Catholic school in Faribault until he was in the ninth grade when he transferred to Faribault High School, completing the ninth grade. When John was eleven or twelve he worked for farmers hoeing weeds. He worked in a furniture factory for a year until he was sixteen. To enlist in the army, John lied about his age saying he was already seventeen. He served in the army for three years being stationed in Texas, Germany, France and other foreign countries. He attained the level of first sergeant before being honorably discharged. For one year his duty was to guard German prisoners who were called Jerries. John was nicknamed the "wood pile sergeant" because for punishments he would have the prisoners saw wood. After the war was over, he remained in France in the army for a time. For spending money he entered boxing matches receiving fifty dollars for every fight he entered. He would send some of this money home to help out his parents.
John returned home to Faribault and was a wood worker at the truck factory in the 1920 census. He attended six weeks of catechism instruction in the Lutheran Church, joining the Lutheran Church shortly after he and Helen were married. John was a fireman in Faribault for several years until John and Helen moved to Wausau, WI in 1926. He then acquired a part time job as a postal clerk for six years. Since he was a substitute clerk and not employed full time, he also had jobs at a battery factory where he made batteries, at a paper mill moving large stones, and at a hotel as a night clerk during the six years at Wausau. After John developed rheumatoid arthritis and heart trouble in Wausau, he had to quit working and the family moved back to Faribault where Helen acquired a job working for the WPA. In 1937, the family purchased a farm three miles from Stockton, MN. The farm had forty acres with fifteen of the acres being tillable and the rest being wooded and hilly. Besides raising crops, the family raised cattle, ducks, geese, chickens and vegetables.
In 1947, the family moved to Winona, MN. Helen had a job in the glove factory for a year and a half and then began working at Schafers Cleaners as a presser for the next eighteen years. During this time in Winona, John was a real estate salesman for about two years. They purchased a home at 256 W. Fourth St. and also a house at 227 W. Third St., which was remodeled and made into rental apartments. The family home on 256 W. Fourth Street also had two apartments upstairs which were rented out to single women. John developed a blood clot in his leg but did not go to the doctor, using home remedies. In two weeks time, the blood clot moved to his heart and he died.
John was nicknamed Jack. He was a member of the American Legion and the Veterans of Foreign Wars having served in World War I. John received military rites at the graveside.
The above information was received from Ann Alice (KRANZ) KURTH on 04 Sep 1992. John Peter McCarthy also went by the name of Jack.

The following obituary is from the Faribault Daily News:
McCARTHY - Joseph McCarthy passed away at his home on South Willow street Saturday evening at 9 o'clock after a long illness. The deceased had lived in Faribault practically all of his life, his parents being numbered among the first settlers that came to Faribault, coming by ox team from Red Wing about 1855. Joseph McCarthy was born on Third avenue in this city May 4, 1865 and received his education in the local parochial schools and the high school. He was married to Miss Anna Madden of May County, Ireland, Nov. 5, 1895, to which union six children were born, only one of them surviving. He leaves to mourn his loss, his wife, his only child, Mrs. Mary Howard of this city; three brothers, John of Minneapolis; Daniel, of Hastings, Minn., and Jerry McCarthy of Faribault and one sister Mrs. Cecelia Tracy of Weldon, Montana. Funeral services will be held at the Church of the Immaculate Conception Tuesday morning at 9 o'clock.

Child of Kenneth Iver McCarthy and Rita A. Friesen

Kurt McCarthy during Christmas 1976.
Kurt Edward McCarthy was born on 14 January 1973 at St. Paul, Ramsey Co., Minnesota. He was the son of Edward James McCarthy and Joan Louise Kukowski. Kurt Edward McCarthy died on 16 July 1995 at Ramsey Co., Minnesota, at age 22. He was buried on 20 July 1995 at Guardian Angel Cemetery, Oakdale, Washington Co., Minnesota.1
The cause of death was Kurt was born 3 months premature, and had numerous complications. He was never married. SOURCE: Joan McCarthy 02Jun1992. His Social Security Number was 473-90-0722 issued in 1978. Social Security Death Index lists death as 15 Jul 1995.

Letter from Claire Kassinger dated 9/1994 states that her sister Leah was born in 1909 and died at age 18. "My understanding is that she was a premature baby and probably had Cerebral palsy. She was very intelligent and she was able to read and print although there was no school or other help for her as there is for handicapped children today."

Following is the obituary for Lowell McCarthy:

Lowell J. 'Sparky' McCarthy
McCarthy, Lowell J. "Sparky" age 85, of Edina, MN, peacefully passed away in his home on April 13, 2015. Preceded in death by parents Olga and Frank; and brothers Robert and Gerald. Survived by his loving wife of 61 years Joan; three sons Kevin, Brian and John (Gail); and grandson Samuel. Also survived by sister and brothers-in-law and many nieces and nephews. Lowell was raised in St Paul, MN and was a graduate of Hamline University, Macalester College and the University of the Americas in Mexico. Lowell was a husband, father, teacher, artist, coach, U.S. Marine and the City of Edina Parks & Rec. Director. Lowell was a teacher of Art and Art History for 30 years at Edina and Edina East High School. He was an employee of the City of Edina for over 40 years. Lowell had the gift of making everyone he met feel special. He was a very empathetic teacher who saw the potential in every student he taught. He will be greatly missed by family and friends. Funeral service 11:00 am Saturday April 18, 2015 at Edina Morningside Community Church, UCC, 4201 Morningside Road, Edina. Visitation one hour prior to service. In lieu of flowers, memorials preferred to ARC. Washburn-McReavy.com Edina Chapel 952-920-3996

Mary McCarthy was born circa 1857 at Faribault, Rice Co., Minnesota.1 She was the daughter of John McCarthy and Saraphine Sheehy.
Mary is not in the 1865 MN Census with rest of family, deceased?

Mary (Muriel) McCarthy died circa 1907; died within 3-weeks of birth from dysentery. She was born circa 1907 at Faribault, Rice Co., Minnesota, Mary was born in a house with an attending midwife in Faribault. She was the daughter of Jeremiah McCarthy and Mary C. McGinnis.

Mary Lou Harn at her wedding 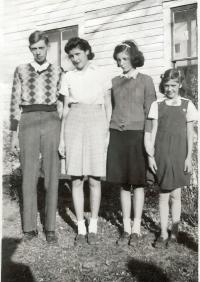 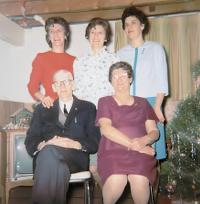 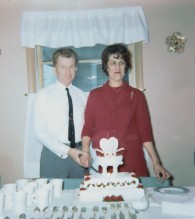 She received First Holy Communion on 14 May 1944 at Immaculate Conception Catholic Church, Faribault, Rice Co., Minnesota. Mary Lou McCarthy was a housewife. Her Ancestral File Number is 1V1V-ZPT. As of 1955,her married name was Mary Lou Harn. Her married name was Mary Lou Redman. She was employed by Genova in 1981 at Genova, Faribault, Rice Co., Minnesota. The cause of death was Abdominal Carcinomatous, Recurrent Carcinoma of Colon. Mary Lou McCarthy was a Catholic. Her Social Security Number was 476-32-6599 issued in Minnesota.

Mary Lou was born at 6:03 am. Mary Lou received about 9 years of schooling. When younger, she had done numerous jobs in Faribault, factory work, waitressing, and field work. With wages as a waitress from 50 to 75 cents an hours. Doing factory work, she was getting $1.25 an hour. Mary Lou considered herself a Democrat. She enjoyed reading, fishing and dancing. Growing up, she recalled the lean times, the rationing. How her father was strict, and that her parents did not have a car. On 07 Jan 1970, Mary Lou adopted the two daughters of Harold W. Redman: Connie Jane Redman and Jody Ann Redman, and Harold adopted Mary Lou's son Steve. The Minnesota Driver's License at the time of her death in 1982, said her eyes were hazel, was 5' 8" tall and weighed 124 pounds.