Minnie Vrzal,81, Services Friday Mrs. Thomas (Minnie) Vrzal, 81, Dickinson, died Thursday at the St. Joseph Hospital, Dickinson. A daughter of Anton W. and Rose Kralicek Sadowsky, she was born April 4, 1894, in Dunn County and grew up on a farm 12 miles north of Dickinson. After her marriage to Thomas Vrzal on Aug. 3, 1915, at New Hradec, they farmed six miles south of Manning. They moved to Dickinson in 1928. Mr. Vrzal died Dec. 24, 1947. Mrs. Vrzal had been a resident of St. Luke's Nursing Home, Dickinson, for the past four and one half years. She leaves a foster daughter, Mrs. Richard (Wenifred) Dolecheck, Dickinson; a sister, Mrs. Peter Kovash, Dickinson, and brothers, Anton J., Frank J. and Louis V., all of Dickinson. Services are set for 10:30 a.m. Friday from Sf. Wenceslaus Catholic Church, Dickinson. A rosary will be said at 7 p.m. Thursday at the Mischel-Olson Funeral Home Chapel, Dickinson.

Alyssa Kranz is the daughter of Mark Jefferson Kranz and Sarah Edens.1

Caleb Kranz is the son of Mark Jefferson Kranz and Sarah Edens.1 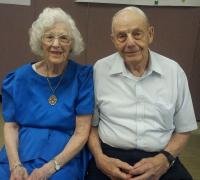 Helen McCarthy Kranz and Frederick Kranz 70th anniversary in 2013
Frederick Arthur George Kranz was born on 25 March 1923 at Dover, Olmsted Co., Minnesota.1 He was the son of John William Kranz Sr. and Margaretha Caroline Henriette Bittner. Frederick Arthur George Kranz was baptized on 27 May 1923 at Minnesota.1 He graduated in 1941 at Dover High School, Dover, Olmsted Co., Minnesota.2 He was confirmed on 14 December 1941 at St. Martin’s Lutheran Church, Winona, Winona Co., Minnesota.1 He married Helen Veronica McCarthy, daughter of John Peter McCarthy and Helena Minnie Mathilda Velzke, on 10 July 1943 at St. Martin's Lutheran Church, Winona, Winona Co., Minnesota.1,2 SOURCE: Helen McCarthy letter 8/1990. Fred and Helen travel Midwest in their recreational vehicle. They work with other volunteers to build/renovate churches. SOURCE: Helen McCarthy 90th birthday family picture. SOURCE: Ed and Susan Kranz letter December 1996. Frederick Arthur George Kranz lived in 2000 at 1160 Oakview Dr., Apt 11, St. Charles, Winona Co., Minnesota.
Following in email from Ann Kurth in Jan 2007:
My parents decided that they wanted to sell their home in St. Charles, MN and move to Missouri to be closer to my sister Kay Lieb. They had been talking about moving for quite a few years and then decided this was the year to move. Their mobile home sold in just two weeks, they packed up their belonging and moved to a small duplex in a community called Grain Valley, MO, just 5 miles from where my sister lives. They unloaded their things, got a few things settled, became residents of MO and then headed south to work on different projects for their church. They did all of this the beginning of October. It is still hard for me to believe that my parents would move away from Minnesota where they have lived for over 80 years and take up residence in a new state. They did this in preparation for the time when they won’t be so spry and not able to travel around the country in their motor home. I hope I have as much energy when I reach their age.3

Following is the obituary for Frederick Kranz:

Frederick Kranz, 91, of Grain Valley, Missouri, passed away Monday, January 19, 2015 at St. Mary’s Medical Center, Blue Springs, MO. Funeral services will be held at 11:00 a.m. Saturday, January 24th at Timothy Lutheran Church, Blue Springs. The family will receive friends from 10:00 a.m. until service time at the church. Burial will be held at a later date in Saratoga Cemetery, Saratoga, MN. Memorial gifts may be designated for Timothy Lutheran Church.

Fred was born March 25, 1923, on the family farm in Dover, Minnesota, the son of John and Margaret Kranz.
Fred was baptized in Christ on May 27, 1923 and confirmed his faith in Jesus Christ on December 14, 1941 at St. Martin’s Lutheran Church, Winona, MN. He graduated from High School in Dover, MN and married Helen Veronica McCarthy on July 10, 1943 in Winona, Minnesota.

He spent 51 years farming in Minnesota. He created Diamond K Enterprises distributing organic products in all 50 states and internationally. Beyond farming he was self-employed in sales and agricultural-related services. After he left farming he used his many skills serving the Lord as a volunteer for MAPS: building churches, bible schools and camps, and Teen Challenge. His volunteer service to the Lord included more than 80 projects in the United States and 3 internationally. He also volunteered locally with Habitat for Humanity.

Moving to Grain Valley, Missouri in 2006, he joined Timothy Lutheran Church in 2007. He participated in Pairs & Spares and Bible Studies. He was faithful in worship, intentionally setting aside Sunday as a Sabbath day of rest.

Fred is preceded in death by his parents, his brother John and his sister Margaret.
He is survived by his wife of 71 years, Helen Kranz of Grain Valley, MO; his sister Alice Rainwater of Fresno, CA; his children: Joan (Jay) Simonsen of Rosharon, TX; Kay (Francis) Lieb of Blue Springs, MO; Ed (Susan) Kranz of Ravendale, CA; Ann Kurth of Denver, CO; Jack (LaDonna) Kranz of St. Charles, MN; his 10 grandchildren and his 30 great-grandchildren.

Having received the gift of faith in Jesus Christ, Fred is now celebrating the victory of eternal life with Jesus.

Shayla Brianne Kranz is the daughter of Mark Jefferson Kranz and Sarah Edens.1

Tyler Wade Kranz is the son of Mark Jefferson Kranz and Sarah Edens.1 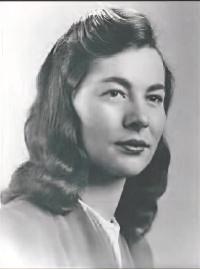 SCHALLER, Leone Long time Pullman resident Lee Schaller passed away on Sunday, December 7, 2014, Pearl Harbor Day, at age 91. Her World War II veteran husband Clem passed away in April of this year at age 93 just prior to their 68th wedding anniversary. Lee was born on May 17, 1923 to William and Anna (Schillinger) Krebsbach in Reeder, North Dakota, the daughter of a rancher/farmer and agri-banker. Lee was very proud of her father who, as a banker, saved many farmers from bankruptcy during the Great Depression. It was common for Lee to drive truck during harvests. After high school Lee attended The College of Saint Teresa in Winona, Minnesota where she earned her bachelor's degree in Social Studies in 1945. While in college Lee was involved in theatre productions as an actress. After graduation she drove her two-door black Ford convertible (with rumble seat) from Minnesota to Okanogan, WA for her first job. She was a new social worker in the Okanogan/Omak area, renting a room owned by a relative of her future husband, Clem, whom she met when he was home on military leave. It was thought that Clem was attracted to Lee's car and Lee was attracted to Clem's uniform, and they were married in Omak on May 4, 1946. From then through 1952 the family moved to different Air Force bases and during that time Lee bore four sons (in order of birth): Jeffrey, the twins Jon Steven and Christopher, and Joseph, all within 2 2/3 years. Clem brought Lee and the family back to Pullman in 1953 to finish his school at Washington State College (now WSU). After Clem earned his degree in Architectural Engineering in 1956, Lee and Clem talked about moving to Chelan, but in the end decided to make their home in Pullman, much to the benefit of many Pullmanites. Over the years Lee was a homemaker who took on the task of raising four rambunctious "Children of the Sixties" sons. Lee was also active in the Sacred Heart Catholic Church in Pullman. After Clem retired as a private builder in 1979, they sold the family home in Evergreen Community in 1980 and over time lived in a couple of townhouses on SW Crestview in Pullman. During those retirement years they enjoyed snow-birding in Hemet, CA. and were avid golfers where Lee golfed in the Pullman Women's League. In recent years they moved into Bishop Place, where Lee was much loved by the staff that cared for her, whom she loved dearly. Lee is survived by her four sons Jeff in Pullman, Chris in Tacoma, Jon Steven (Nancy) in Yuma, AZ/Winthrop,WA, Joe (Louise) in Gallup, NM, and sister-in-law Beverly in Lodi, CA., and was preceded in death by husband Clem, sister Wilma Norby, sister Marian Krebsbach, and brother Buzz Krebsbach. Graveside committal services will be held at 12:00 p.m. on Thursday December 18, 2014 at the Pullman Cemetery. A memorial service will follow at 1:30 p.m. at the Bishop Place Independent Living Social Hall, concluding with a reception of light refreshments. KIMBALL FUNERAL HOME & CREMATORY of Pullman has been entrusted with funeral arrangements.

Children of Leone A. Krebsbach and Clemens A. Schaller