Mark Perkins is the son of Douglas Luther Perkins DDS and Joyrene Sanderson.1

Mark Perkins is the son of Charles Perkins and Virginia Wise.

The cause of death was croup.

Following from The Red Wing Daily Republican Newspaper, page 5 column 1, 26Mar1898 (Saturday).
The eight month old son of Mr. and Mrs. M.T. Perkins died this morning of croup. The funeral services will be held at the home on Monday afternoon, at 1:30 o'clock, Rev. W.C. Rice officiating. 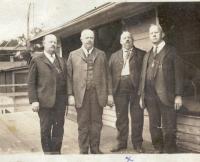 History of Dakota and Goodhue Counties, MN, Vol II, 1910, pg 707-708.
Marshall T. Perkins, Red Wing liveryman, was born in Featherstone township November 28, 1862. His parents H. and Violet E. (Ellsworth)Perkins, came from Maine, their native state, in the late 1850's, and purchased a farm in Featherstone, where Hartson carried on farming extensively until some time in the 1870's. He then came to Red Wing, became interested to a greater or less extent in several business ventures, and died in July, 1899. His wife now makes her home in Boston, Mass.
Marshall T. received his education in the schools of his neighborhood, and kept books for his father two years after leaving school. He then for ten years engaged in farming in Featherstone township, on his own account. Following this he made his first venture in the livery business, running a livery and sale stable at Red Wing for three years. He then again returned to Featherstone and farmed five years. In 1906 he opened his present livery at 319 Plum street, which he has since successfully conducted, being a good judge of horse flesh and a fair-minded business man. He is a Republican in politics, and while at Featherstone served as constable and justice of the peace on several occasions .
Mr. Perkins was married March 17, 1884, at Red Wing, to Anna R. Purdy, daughter of David and Mary Frances (Rolfe) Purdy, natives of New Yorkstate. They came to America in 1864, and located on a farm in Goodhue township, where they remained for some time, after which they retired and moved to Red Wing, where the mother died. The father is also deceased. To Marshall T. and Anna R. Perkins were born nine children: Edward W.,Nina C., Edna E., Frances V., Ada A., Marjorie C., Delta, Doris and Lawrence. Frances V. is a milliner at St. Paul. The rest live in Red Wing, the four youngest being at home. The other of these children died at Red Wing May 13, 1903, and Mr. Perkins was married again, at Red Wing, August 27, 1908, to Lulu M. Harn, of this city.

Following from the book, RED WING, MINNESOTA, Saga of a River Town, by Madeline Angell, published by Dillon Press of Minneapolis, MN, pg 267-268.
"Public transportation within the city was first provided by horse-drawn hacks owned by Marsh Perkins and Albin Almquist. In 1916 John, Carl, Ed, and Herman Dahl started the first full taxi service in Red Wing. They opened an office in a garage in the 200 block of Main Street, starting with four Ford cars. The brothers operated a twenty-four hour service, sleeping two at a time in the office. They met all trains stopping in Red Wing. Six months after they started their taxicab service, Marsh Perkins and Albin Almquist were out of business".

Following from the Red Wing Daily Republican Newspaper, page 1, column 2, 11Dec1939 (Monday).
M.T. Perkins, widely known in the community and proprietor of a livery stable business here for many years, passed away at a local hospital Sunday afternoon about 1:30 o'clock. The end was not unexpected. Mr. Perkins had been in poor health for a long time and had been confined to the hospital since July 3, 1938.
He was born in Featherstone on November 28, 1862, and lived in that township until he was about 35 years of age, when he removed to Red Wing where he had since resided. When Mr. Perkins first came to Red Wing from the farm, the family occupied the old A.P. Pierce home and later the residence of Governor L.F. Hubbard, now occupied by the St. John's hospital offices. He often referred to this place as the "old mansion with the $10,000 slate roof." It was in 1896 that Mr. Perkins and his brother, Alfred, established a livery and boarding stable on Third street in the stone building across from the office of The Daily Republican. At one time during his business career Mr. Perkins operated two liveries, one on Plum street and the other in partnership with A.C. Almquist.
Mr. Perkins was gifted with an unusually fine voice. In his younger days he was soloist in the choir of the First Methodist church and was a member of the Perkins Brothers quartet, which won considerable attention. He also appeared in many local amateur productions. He took over the old St. James livery, operating it for many years, later going into the transfer business which he conducted until failing health forced him to retire a number of years ago. He held the contract for carrying mail from the post office here to Hager City, Wis., over an extended period.
Mr. Perkins was a great lover of horses and possessed several valuable animals at one time. Of a congenial nature he made friends with all whom he met and enjoyed the acquaintance of a majority of residents of the city and the nearby community.
On March 17, 1887, he was united in marriage to Anna R. Purdy, who died in 1903. On August 12, 1908 he married Lula Harn Cook. She died about four years ago. He is survived by two sons, Edward, St. Paul, and Lawrence R. Perkins, Huntington Park, Calif., seven daughters, Mrs. G.E. Carlson, Mrs. Carl Adler, Mrs. T.J. Seiz and Mrs. L. Van Deusen, Red Wing; Mrs. W.B. Davis, Oconomowoc, Wis., Mrs. C.G. Johnson, St. Paul, and Mrs. O.C. Harn, Faribault; 17 grandchildren, six great grandchildren, and two brothers, Drs. B.T. and E.A. Perkins, Houston, Tex. The funeral will be held Wednesday afternoon at 2:00 o'clock at the Ferrin mortuary with the Rev. J. Wilbert Lillico officiating. Burial will be at Oakwood cemetery

Following from the Red Wing Daily Republican Newspaper, page 5 column 1,12Dec1939 (Tuesday).
Funeral services for M.T. Perkins, who was in the livery stable and transfer business in this city for many years, will be held tomorrow afternoon at 2:00 o'clock at the Ferrin Mortuary chapel with Dr. J.W. Lillico officiating. Perkins died Sunday following a lingering illness.

Mary Foster Perkins was born in 1807 at Farmington, Franklin Co., Maine.1 She was the daughter of Isaac Perkins and Elizabeth Foster.1

Matthew Perkins is the son of Douglas Luther Perkins DDS and Joyrene Sanderson.1

Children of May Perkins and Stephen Edward Sax

Mildred A. Perkins was born on 12 July 1901 at North Dakota. She was the daughter of Dr. George Albion Perkins and Minnie Frances McDowell. Mildred A. Perkins married Guy E. McCune. Mildred A. Perkins died on 10 February 1985 at Huntington Beach, Orange Co., California, at age 83.
Her married name was McCune. She lived in 1941 at Fairmont, Martin Co., Minnesota. Obituary of father in 1941, listed daughter living in Fairmont.

Child of Mildred A. Perkins and Guy E. McCune

Nabby Perkins was born in 1797 at Farmington, Franklin Co., Maine.1 She was the daughter of Isaac Perkins and Elizabeth Foster.1 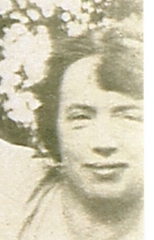 Patricia Perkins is the daughter of Joseph Perkins and Sandra Brown.

Peter Perkins is the son of Jonathan Perkins MD and Sarah Westberg.1

Rachel Perkins is the daughter of Phil Perkins MD and Ruth (?)1